Our Thinking
AWE2019: Our Immersive Future

Since joining Kainos, most of my time has been in the Applied Innovation team, where I have worked as a VR (Virtual Reality) Developer. In October, I had the opportunity to attend the Augmented World Expo (AWE) EU 2019 in Munich – one of the world’s leading immersive conferences. AWE was split over 2 days and offered attendees a chance to discover, experience and get inspired by the most compelling industry of our time.

Attending AWE gave me an excellent opportunity to expand my knowledge of immersive technology and its wider potential, while giving me a chance to network with fellow VR Developers.

AWE was celebrating its 10th anniversary this year, which saw a bumper crowd in attendance — almost 2,000 attendees travelled from far and wide. They were there to learn about the impressive immersive use-cases and hear industry specialists discuss how the future of the immersive market will look. AWE also hosted an exhibition hall which was another exciting pull of the conference, showcasing striking immersive experiences and interesting new hardware like omnidirectional treadmills, haptic suits and the world’s first VR headset with a human eye-resolution display.

There were a number of key areas focused upon at AWE, these are a reasonable indicator of what immersive may become in the short-term future!

The adoption of Augmented Reality within social media platforms was a huge topic; with the likes of Snapchat, Instagram, and Facebook already forming a platform for AR marketing.

Businesses have realised that using AR is as an effective way of making their marketing campaigns stand-out by providing an interactive and unique experience for users. Having something that stands out will encourage people to share advertising with friends and promote it further.

These types of AR experiences are certainly increasing in popularity as it’s becoming an affordable and powerful way for brands to reach a viral audience.

2. AR tracking will continue to improve

AR has become more readily accessible to us as the software is now present on our smartphones. However, using AR applications to assist in day-to-day tasks is currently more of a concept than a reality. Although with the quality of AR tracking improving and becoming more easily accessible to us, we will see it emerge more frequently.

Online shopping is great, but have you ever ordered something online, tried it on when it arrives and it looks completely different from what you expected? This is something that AR is helping to overcome, through product visualisation.

Speedo is a great example of this; they’ve built an AR application which provides online shoppers with an easy way to visualise goggles on their face. This empowers customers to make smarter purchasing choices and Speedo expects to see fewer returns from online sales.

Perhaps this is just the beginning of product visualisation and eventually, we can visualise entire outfits through the power of AR. The significant improvements in facial and body AR tracking make this possibility increasingly more possible.

3. Cybersecurity concerns will be raised

Cybersecurity concerns always need to be considered with any new technology and with immersive technology, it seems that we’re getting ahead of these vulnerabilities. XRSI (XR Safety Initiative) is an organisation which develops standards around security for AR & VR. They delivered a discussion on some of the vulnerabilities of VR hardware and how it can be at risk of cyberattacks.

With immersive tracking technology becoming increasingly accurate and accessible, we have a growing amount of sensitive biometric data being spewed out from hardware. This biometric data can include your position in a room and even where your eyes are looking. It’s no surprise that in the wrong hands, this data could be easily misused.

Most VR Headsets typically possess external cameras which help scan a user’s space. XRSI identified a vulnerability in some VR Headsets where it was possible to access this live camera stream. This is obviously a large privacy concern, but through XRSI successfully identifying this vulnerability to the manufacturers, it was patched before any harm was made.

When establishing a space for VR, we must confirm boundaries for the user to move within. XRSI spoke about a vulnerability which permitted an attacker to disable and re-adjust these chaperone boundaries when the user was wearing the VR Headset. This allowed an attacker to move the user in real space without them actually knowing, almost as if they were controlling the user’s movement with a joystick.

Just imagine if you’re watching someone playing BeatSaber and their chaperone boundary slowly starts moving towards you… yeah, not so much fun.

4. The level of accessibility which immersive can achieve will continue to amaze us

An amazing aspect of immersive technology is that it’s achieving a distinct level of accessibility which other technologies aren’t capable of recreating. A great example shown at AWE was Touching Masterpieces. The concept of this application is that it utilises haptic feedback gloves to empower the blind to visualise and experience historic masterpieces through the sense of touch.

When we think of immersive technology, our immediate thoughts are that it’s a visual technology. While that’s true, it’s far much more than that. Immersive technology is a combination of display, audio and haptic which is why there’s so much opportunity for immersive to enhance accessibility.

The Exhibition Hall was another exciting part of AWE –  here, I had the chance to try out some of the latest immersive tools on the market.

Omnidirectional treadmill for VR, enabling the user to walk in infinite space

A stall which immediately grabbed my interest was Varjo; this is a name that we’re likely to hear a lot more about in the future of the immersive industry. Their most recent groundbreaking device is the first-ever VR Headset which is capable of recreating a display resolution equal to that of the human eye-resolution, they collaborated with Volvo in carrying out this research. Not only does it allow you to view VR experiences with a human eye-resolution display, but it also allows you to view mixed reality with human-eye resolution.

Fun fact: They actually tested their initial prototypes by driving an actual car, on an actual road, at night, whilst wearing their VR Headset… Yeah, these guys are pretty out there!

Not only this, but they also designed a VR headset that has their very own built-in eye-tracking system which they name as, “the world’s best”. This is something that struck quite a lot of interest for me as a lot of the VR-related research which we have carried out in Applied Innovation, has involved eye-tracking. I got chatting to a member of Varjo which allowed us to exchange our similar experiences with eye-tracking technology.

6. Being the ‘User’ rather than the ‘Developer’

Getting to experience other creators’ applications at AWE allowed me to have a better understanding of what should be expected from our own immersive projects in Kainos. Observing from the user’s side instead of the developer’s side allowed me to discover particular features which others had included in their own experiences.

For example, some developers had added a feature in their applications which tunnels the user’s vision when they move or turn in virtual space. After chatting to several different developers about this, they explained that the purpose of this feature was to reduce motion sickness. Motion sickness in VR tends to happen most frequently whenever your movements in the ‘real world’ and ‘virtual world’ are desynchronised. This can cause mild to severe motion sickness depending on the individual.

I tested this in a VR cycling experience where it used the vision-tunnelling feature whenever I was turning in the virtual world. I was surprised at the effectiveness of this feature as it significantly reduced the feeling of disorientation and prevented me from feeling motion sickness. I felt that this made the experience much more real and far more enjoyable. 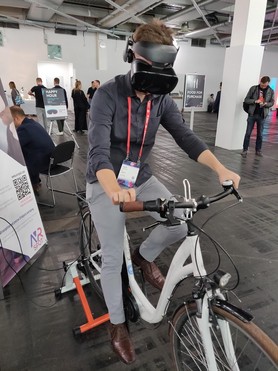 From the feedback that we’ve gained from running demos of our own work, we’ve noticed that some people tend to feel motion sickness. Through experiencing the tunnelling feature and how it successfully reduced motion sickness, this is something that I have included in the latest version of our VR Hazard Perception Test. Through gaining this knowledge at AWE, this is a feature that I’ll ensure to consider in future VR work.

Attending AWE was a brilliant experience, it allowed me to experience a wealth of exciting technology, meet many passionate people and has benefited my overall awareness of immersive technology and what is expected from the future of immersive.

Find out more about our innovation team and the work they do here.