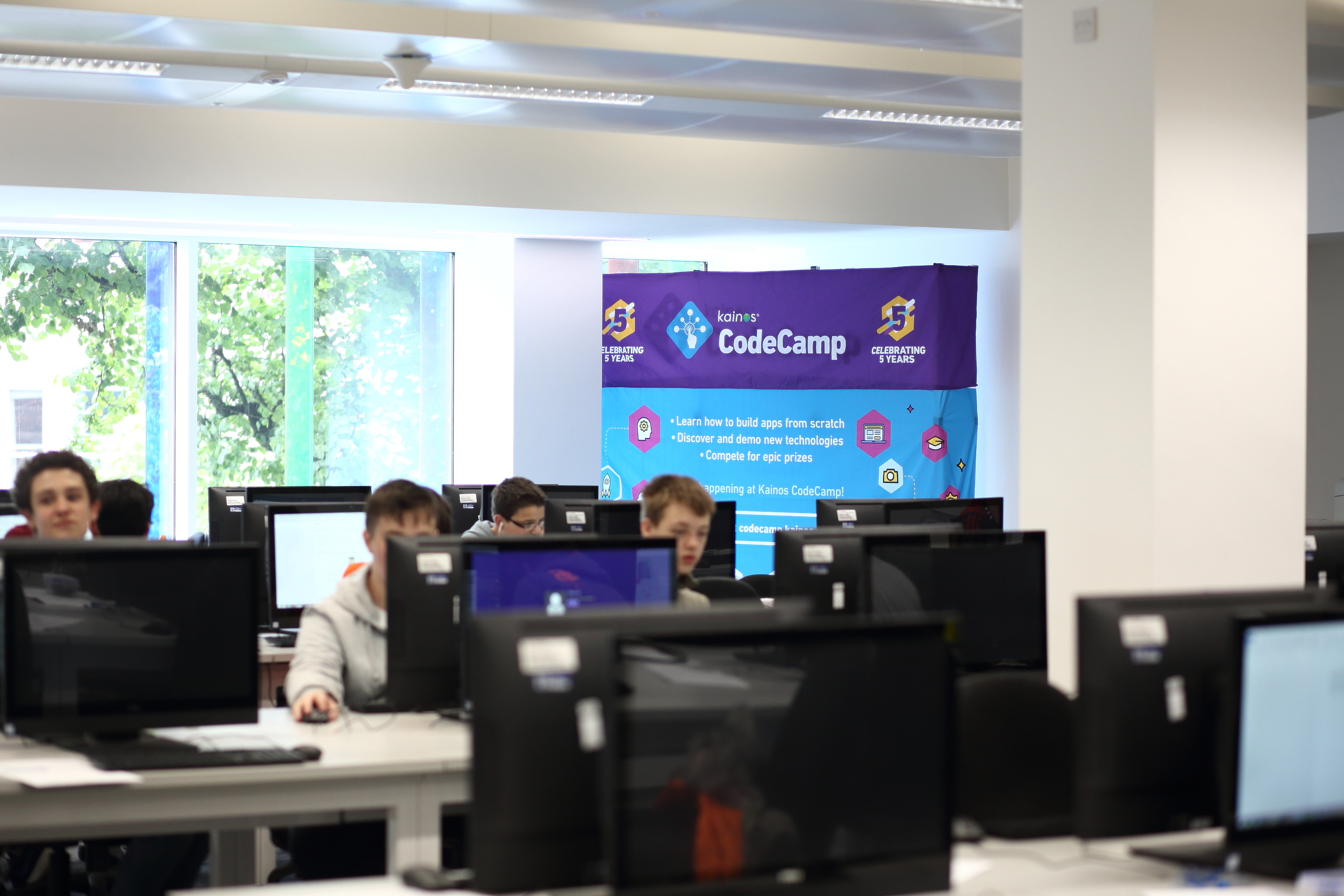 Attendees heard guest lectures on the tech topics of the moment, from cybercrime to artificial intelligence, as well as getting a chance to try out the latest VR headsets. They also took part in group challenges, using binary to decode puzzles and win great prizes. And they developed their coding skills with workshops in programming languages like HTML and Java.

But the biggest element of their fortnight with Kainos was learning how to use App Inventor to create, develop and launch their very own app. Participants got a real taste of a true software development environment, with daily stand-ups, mentorship from professional and graduate software developers, and an insight into the agile development process.

On the final day of the camp, participants submitted their apps for judging, with ten finalists going through to present to a panel of professional judges from across the tech industry. The judges took into account the purpose of the app, how well it had achieved its objectives, the technology used, and the quality of the coding and presentation.

They then selected three winning apps:

The app used the device’s accelerometer to detect whether the user was sitting or standing correctly, issuing warnings when posture was incorrect and offering guidance on how to achieve perfect posture. The judges praised its innovative use of device hardware and noted that the development was particularly advanced.

Mind File was developed for patients in the early stages of dementia to store personal information such as favourite songs, previous holiday destinations and family names which could then be recalled by the app at a later date when required. It also included games and puzzles proven to counter the onset of dementia. Judges felt that the app showed a great understanding of its potential users and was easy to get to grips with.

This app allowed users to log in and register areas of danger (i.e. crime hot spots, sites of temporary protests or attacks). Other users could then verify this information, increasing the relibaility of the data. Anyone in the surrounding area could then see these locations highlighted on a map and find out more information about them. Judges praised the app for utilising mobile crowdsourcing effectively to benefit the wider population.

“The judging panel were extremely impressed with the high standards of the apps created, as well as how creative the ideas were – we saw everything from tools to improve your health and wellbeing, to fun and stimulating games for kids,” says Tech Outreach Manager, Gemma Crothers. “As well as that, our mentors commented on the commitment and dedication shown by our Campers throughout the two-week programme – they got their first taste of a professional development environment and really rose to the challenge.”

“What’s been great about running CodeCamp is watching how the students have developed over their time with us,” says this year’s CodeCamp lead, Eamon Compston. “And not just in terms of technical skills, but also their professional and personal development. We helped them to improve their soft skills like teamwork, presenting and problem-solving, as well as their confidence and ability to work independently. And it was fantastic to see them build personal relationships, too – they started CodeCamp as a group of 200 individuals who didn’t know each other at all, but left having made lots of new friends – and hopefully having had a great time, too.”

“Kainos CodeCamp was a fantastic experience which expanded my knowledge and interest in code,” said Tiarnán. “I enjoyed the vast curriculum of code we explored, from Android App Development to Cyber Security. I am very grateful to Kainos for the opportunity to attend CodeCamp and I would highly recommend it.”

After the judging, participants celebrated with birthday cupcakes marking a successful fifth year for CodeCamp. But the team aren’t resting on their laurels. Back at Kainos, they are already in the planning stages for next year’s event. “This was definitely our biggest and best CodeCamp yet,” Gemma says, “but we intend to make next year’s even better. We want to be able to accommodate more young people, as well as help them to progress to the next level… so watch this space!”

To find out more about Kainos CodeCamp, as well as some of the other opportunities Kainos offers to young people, students and graduates, visit the Kainos website.