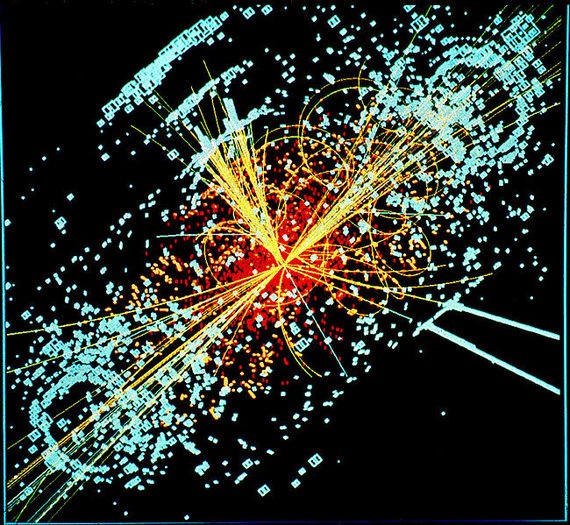 Kubernetes is the most widely used and universal container orchestrator. What that means is that it is becoming a standard solution to deploy and manage containerized applications in any cloud or on-premise. It can manage thousands of nodes (computers) and treat them as any number of clusters. It makes deploying and running applications on top of that stack extremely easy. Kubernetes definitively won the battle and outran all other competitors on the market by far. It is also currently the most popular Open Source project in the DevOps space after Linux.

KubeCon, the most important Kubernetes conference, that also encompassed the whole ecosystem that grew around it, was held earlier this year in May in Barcelona, Spain.

During KubeCon we were treated to a fascinating presentation by Computing Engineer Ricardo Rocha and Physicist Lukas Heinrich from CERN – the European Organization for Nuclear Research also known as the world’s biggest particle physics laboratory.

What they showed was an analysis of physics data delivered by The Large Hadron Collider proving the existence of a predicted fundamental particle known as Higgs Boson. For the theoretical discovery of a mechanism that contributes to the understanding of the origin of mass of subatomic particles and the confirmation made thanks to Kubernetes, Francois Englert and Peter W. Higgs won the Noble Prize in Physics in 2013.

During the speech, we could see how beneficial the usage of Docker and Kubernetes orchestration is and how universal that solution can be. Thanks to one of the Public Cloud providers delivering an online Kubernetes cluster with 25000 CPU cores, storage with a 70TB original dataset from particle collisions and leveraging 25000 Kubernetes Jobs, presenters recreated the discovery process the same way they did on-premise using Kubernetes Cluster at CERN. This clearly shows the potential and how universal Kubernetes, one of the most popular DevOps tools on the planet, really is.

Kubernetes is something that everyone interested in technology should have on their radar. This is the biggest change in the way we work since introducing Virtual Machines!

Want to know what we do with Kubernetes? Lets listen to Daryl Porter, Solution Architect, at Kainos:

“At Kainos, our use of Kubernetes has developed rapidly over the last couple of years. We have delivered and continue to run multiple services on kubernetes in production across a range of different platforms. Wether that be through building our own kubernetes clusters on VMs or utilising PaaS offerings such as AKS on Azure and EKS on AWS.

This has helped us as a company to evaluate a wide range of approaches and form a best practice guide for how we deploy and run workloads in kubernetes. Our experience has shown us that running workloads in Kubernetes, particularly on PaaS solutions, takes away the effort of provisioning underlying computer infrastructure, which free’s up time to focus on adding value to the platform through things such as auto-scaling, auto-healing, intelligent monitoring/alerting etc.”

To learn more about our cloud services and to speak to a cloud expert click here.