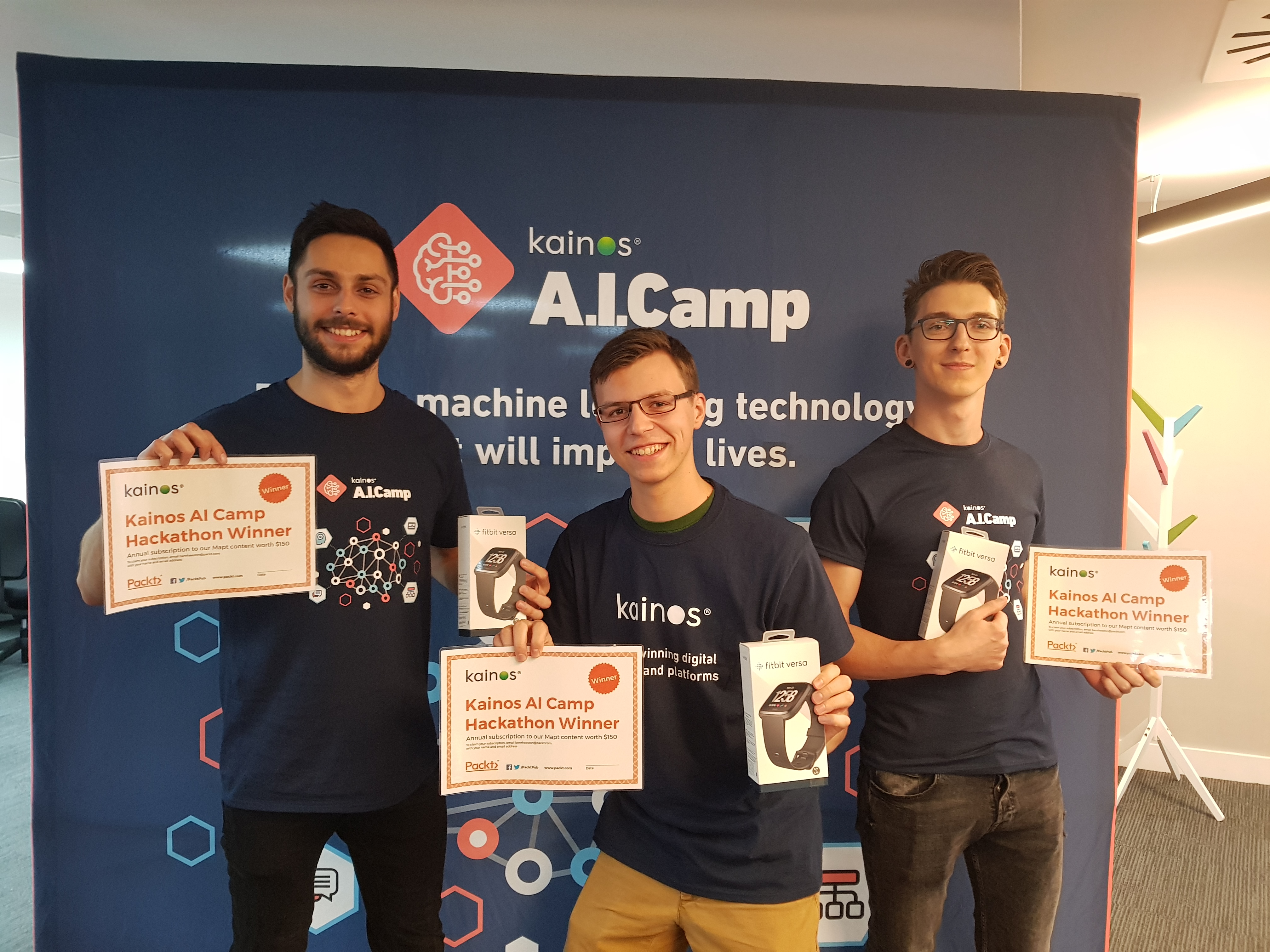 From identifying media bias through to keeping our streets clean and safe, A.I. contestants show how AI can be applied to everyday life

Kainos, a leading provider of digital services and platforms, today announced the winners of its A.I.Camp in Birmingham. The wining team of three, all of whom are currently studying at University of Birmingham, were: Dominik Henjes, Paul Popa and Aleksandr Jermakov – who impressed the judges with their original application of Artificial Intelligence within the field of image translation in mathematics.

“Our Birmingham A.I.Camp has been a big success, with Dominik, Paul and Aleksandr proving worthy Hackathon winners,” comments Tom Gray, CTO for Kainos. “Over the past two weeks, we have seen students displaying a genuine passion for AI.  This was inspirational to witness, and has reaffirmed what we already knew of Birmingham’s tech scene. I am sure that this is not the last that we will see of these students, because Kainos is continually nurturing talent through its range of camps and programmes.”

Twenty undergrads competed in teams during a gruelling two-day hackathon, which followed two weeks of training and talks on the basics of machine learning and its applications. AI experts from Microsoft and Youth4AI joined Kainos on the judging panel to decide the final winners and were impressed with the talent on offer.

The winning team demonstrated exception technical skills, creating their own algorithm to help digitise handwritten and paper-formatted mathematical equations, which was a feat given the timeframes available. Not only was the system able to recognise and convert the equations into code, it could also provide context, making it much more meaningful for future scholars. No system such as this currently exists and there is huge potential for helping to improve knowledge capture in the area of mathematics.

Hackathon judge Naveed Hussain, Big Data and AI Architect, Microsoft said “Based on this event, the future looks bright, both for AI skills and for Birmingham’s growing digital economy. Working with these students reaffirmed my belief that AI is already capable of being put to use in everyday scenarios. There is evidently already a strong talent pipeline, with teams taking just a matter of days to create chatbots capable of answering complex questions about anything from recipes catering to a specific dietary requirement to potential future career paths.”

“On top of AI’s potential to change the world, this event underlines the fact that the next generation of workers is already very capable of big things,” said Kari Lawler, Founder, Youth4AI. “It’s very much an evolving technology, with the boundaries still being drawn – meaning young people who are interested in AI are hitting their stride at just the right time. They will be the ones who figure out exactly what AI is capable of solving and put the work in to ensure it makes a difference in the real world.”

Kainos A.I.Camp is set to return in summer 2019 and students can now register their interest for a place.