Our Thinking
Mentoring Trainees – what I got from the experience 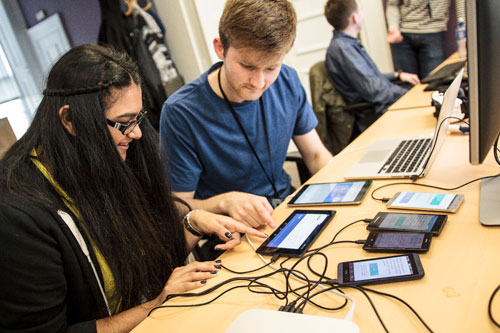 Before discussing the Training Programme, It’s probably best to give myself a brief introduction. My name’s Christopher Gill and I’m a Lead Software Engineer in the Digital Services business unit. My day to day role consists of designing and implementing enterprise grade systems.

What exactly is the Trainee Development Programme?

From June to November 2016, I was lucky enough to take part in the Trainee Development Programme (TDP), along with David Spence as one of the two mentors in the programme for three intakes of graduates and placements. This involved eight weeks of training, consisting of formal classroom learning covering Sql, Java, web development and automated testing and some project work alongside the WorkSmart business unit.

Why do Kainos run this intensive course?

The main benefit of the programme for new starts is that it provides the basic fundamentals of core technologies that are used within the company. The course is Java based, but the core concepts that are taught will apply across any language.

As well as providing fundamental knowledge the trainees were able to work on functionality for the Smart testing platform to actually produce functionality that will go live in the not too distant future, compared to a lot of training programmes where the content that is produced is thrown away at the end. Along with writing actual production code this exposes the trainees to what using Agile is like in a day to day project, they take part in ‘mini-sprints’ during the project work, with all the standard ceremonies of a sprint, but over a reduced period time of a week, allowing trainees to join project teams after the programme and hit the ground running.

What’s in it for the mentors?

As well as being beneficial for trainees who took part in the TDP, being a mentor had its own benefits and challenges, besides the obvious break from day-to-day development. The main things that I got out of the programme were:

1) Getting to organise and run sections of the programme myself from start to finish. Prior to taking part in the trainee development programme the only real things that I had been involved and running were some sprint ceremonies, whereas at the TDP, I was involved in organising and scheduling breakout talks for the trainees, where we would have a guest speaker from within the company come in and talk about what they do day-to-day, organising and planning sprints, show and tells and retrospectives as well as planning and running classroom sessions on automated testing for the trainees. As I said, this was a lot more than what I had previously experienced and I feel that this has given me the experience and confidence to plan and run different things in the future.

2) Giving feedback to my colleagues. Prior to the programme I had given some feedback to people on my team but it was generally quite light on details, whereas in the programme at the end of each intake David & I would draft and write up feedback for all of the trainees in detail trying to highlight key areas that we felt the recipient was particularly good at to constructively feedback on areas that they should keep working on to improve. As you can imagine Kainos only hires very good people, so writing constructive feedback could be quite tough at times – but vitally important for the trainees to get into the swing of feedback, to help them progress in their careers in the future!

3) Receiving feedback. An important part of the programme was that the trainees receive feedback forms at the end of each week. This meant that we were constantly getting feedback with ideas and suggestions on what we could do to improve. An example of this is the content that I had written before the training programme changed drastically and by the end of the programme based on feedback given by the previous two intakes and was of a much higher quality which really shows the benefits of continuous feedback.

4) Confidence. Training and upskilling, being completely different than my day to day job has really brought out a whole new skill set that I wouldn’t have gotten to change to use. This has helped me not only with my communication skills but also helped me cement my leadership skills.

That’s what I have to say about the 2016 training programme, it was a challenging and fun six months and I would encourage anyone who’s given to opportunity to be involved to jump right in and get involved.

For more on careers at Kainos, visit our careers section here.